The AF-4 Cyclone is a submachine gun available to the New Conglomerate. It is unlocked through purchase with Certification Points or Daybreak Cash.

The Auraxis Firearms - 4 Cyclone is the New Conglomerate option for a submachine gun an incredibly high damage output, competing primarily with the

SMG-46 Armistice. Though the Cyclone's rate-of-fire is considerably lower, the far larger calibre keeps the weapon's damage output up at a highly competitive level, with the gun further being particularly accurate and enjoying a very fast reload. Though the Cyclone's theoretical damage-per-minute is lower, the higher calibre bullet allows it to kill on headshot notably faster at close ranges than the Armistice.

The AF-4 Cyclone's brother, the Blitz GD-10, sacrifices a large amount of the Cyclone's signature damage output for a much larger, 50-round magazine, without sacrificing much (if any) of the accuracy that also allows the Cyclone to remain a threat out to mid-range.

The AF-4 Cyclone, alongside the

SMG-46 Armistice, is part of the so-called 'first generation' of submachine guns, as the three were the first wave of faction-specific weapons to be released in the class.

It is possible to get both Ribbons and Medals for using the AF-4 Cyclone. Each Ribbon is a standard reward for achieving a set amount of kills with the Cyclone. Medals relate to how many overall kills you have with the Cyclone. 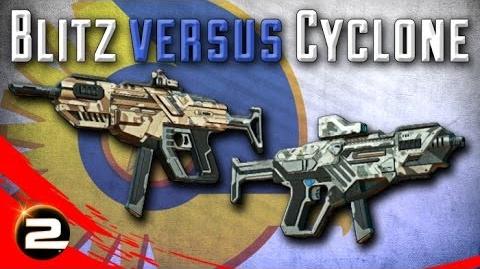 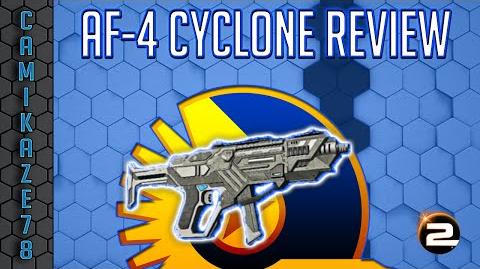 AF-4 Cyclone review by CAMIKAZE78 (2015.09.29)
Add a photo to this gallery
Retrieved from "https://planetside.fandom.com/wiki/AF-4_Cyclone?oldid=99096"
Community content is available under CC-BY-NC unless otherwise noted.