The Bastion Fleet Carrier is an Auraxis-only war asset available to outfits. It is crafted through the combination of several other parts, totaling a cost of 70

. It can only be called down on Amerish, Esamir, Hossin, or Indar, using the Bastion terminal located at any warpgate.

An Empire's might and determination, symbolized in metal and voiced through cannon fire. The Bastion Fleet Carrier descends from orbit, ready to wage war across the battlefields of Auraxis.

Only one carrier can exist per faction at any given time on a continent. Successfully calling down a carrier will summon the airship above the warpgate at which it was called, placing the player that called it in the driver's seat once the carrier has fully entered the battlefield.

The Bastion Fleet Carrier is unlike any other vehicle found on the battlefields of Auraxis. Impervious to any forms of direct damage and toting four pilot-controlled Mauler Cannons alongside nine player-controlled turrets for anti-air and anti-ground usage, the carrier is a massive threat to all targets within range for its hour-long lifespan.

The carrier features 48 total seats. One is reserved for the pilot of the carrier, five for anti-aircraft Bastion CDWS (and CIWS) gunners, and four anti-ground Bastion Battery gunners. The remaining 38 seats provide no function aside transport. Any member of the carrier's parent outfit can spawn into the airship at any time, and attempting to eject will start the process for spawning an Interceptor. 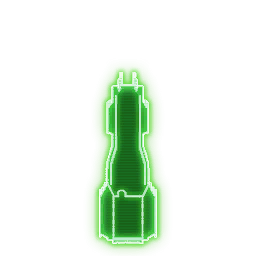 As a war asset, the Bastion Fleet Carrier can only be created and called down by members of an Outfit within which they have the requisite permissions.

The Bastion Fleet Carrier can only be crafted after a multi-stage process where the outfit must craft its four components in turn before finally being able to craft the carrier itself, a process which takes a minimum of 49 hours to complete.

The following components must be crafted in the order they are listed, and only once each of the four are crafted can the carrier itself be crafted at no additional cost—just an additional one hour build time.

Once the crafting process has been completed, calling down a Bastion Fleet Carrier is as simple as interacting with the appropriate terminal at any warpgate the player's faction owns on any eligible warzone continent—provided there are no other Bastion Fleet Carriers currently planetside for that player's faction already. Successfully calling down a carrier will alert all players on that continent to the fact, announcing the calling player's name and their outfit. 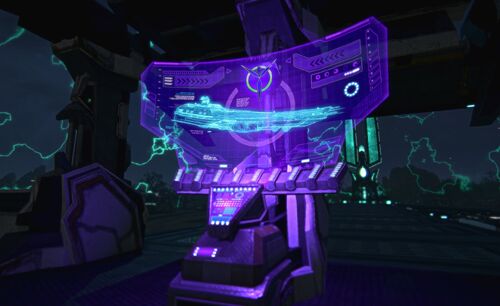 Due to its colossal size, the Bastion Fleet Carrier is not commanded like a typical vehicle. The pilot must use the waypoint menu to direct the airship, placing "Bastion Move" and "Bastion Attack" waypoints on the map to control the carrier's movement.

When moving the Bastion, the carrier will turn towards the waypoint and then immediately move at a constant rate until it reaches the destination. If the destination is at a significantly higher or lower altitude than the carrier's current location, it will climb or descend as appropriate to remain relatively far from ground level.

When using the attack command, the airship's Mauler Cannons will begin to constantly fire at the target location, for so long as the carrier remains within 1000 meters of the waypoint.

If the pilot seat becomes empty at any time, all active commands are immediately dropped and the carrier will stop moving and firing.

The Bastion Fleet Carrier features nine player-controlled turret positions around the top and bottom decks of the airship.

Stationed across the top deck of the carrier are two Bastion CIWS and a Bastion CIWS anti-aircraft gatling turret. These turrets deal high damage to aircraft, having excellent accuracy and generous heat-based ammunition bars.

The underside of the airship features a far larger array of turrets, toting two additional Bastion CIWS anti-aircraft turrets, as well as four Bastion Battery anti-ground turrets. The Mauler Cannons, commanded by the pilot, can also be seen here.

These turrets take up seats two through ten on the carrier.

Any member of the outfit that called down the Bastion Fleet Carrier can, at any time, spawn directly into the Bastion. Including the pilot and gunner seats, the carrier can hold up to 48 players at once time, and seats will be filled in order of entry, with players able to request seat swaps as in any other vehicle.

The player does not have to be in the same squad or platoon as the pilot to spawn into the carrier, only the same outfit.

Pressing the Exit Vehicle key (E by default) while in any seat of a carrier will place the player into a queue to spawn an Interceptor.

Bastion Fleet Carriers, while possessing a health pool of 100,000, are not damaged/destroyed like other vehicles. Instead, attackers are required to destroy all eight Hardpoints located across the carrier.

Each hardpoint features a large 17,500 health pool, with an additional 2500 pool of shielding which begins to regenerate 20 seconds after receiving damage. All damage hardpoints receive to their health pool is permanent, and cannot be repaired by any means. The destruction of a hardpoint deals 12,500 damage to the carrier's primary health pool, with the elimination of all eight hardpoints destroying the airship after a brief animation, causing it to explode to deal massive damage to all nearby infantry and vehicles—allies and enemies alike.

Hardpoints can only be damaged by hostile players, and are immune to friendly fire.

The Bastion's hardpoints are spread across its hull—two located on the carrier's belly, and the remaining six scattered across the top deck of the airship. The latter six hardpoints are located out of reach of ground fire, however can be hit with the penetrating beam of Skylance Cannons from Colossus Heavy Tanks.

Hardpoints are counted as aircraft for lock-on mechanics, such as when using Tomcat A2AM Pods, and can thus be locked onto with said weaponry. 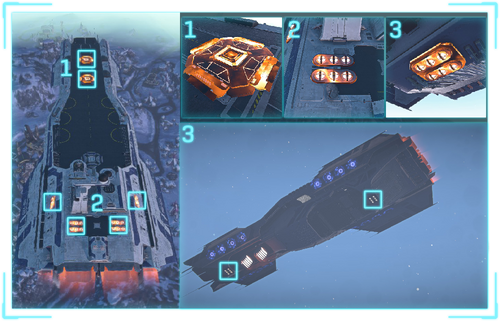 Each piece of the Bastion now crafts in 6 hours, opposed to 12 prior.

Pieces of the Bastion must now be crafted in the following order.

Dev Note: The intention of these changes are to create a buffer of time where resources won't feel "wasted" if they're not going directly toward funding a Bastion. This does slow the rate at which a Bastion can be pulled for those outfits who can easily harvest resources, and we can readjust again in the future if Bastions appear too infrequently on the battlefield.

Bastions now generate Power Projection score while over VS territory. Bastion Uplink Terminal has been renamed "Command Terminal," and has new UI visuals. Seats 3 - 6 no longer show empty ammo pools in the HUD seating chart. Added a missing panel to the starboard side of the Bastion. 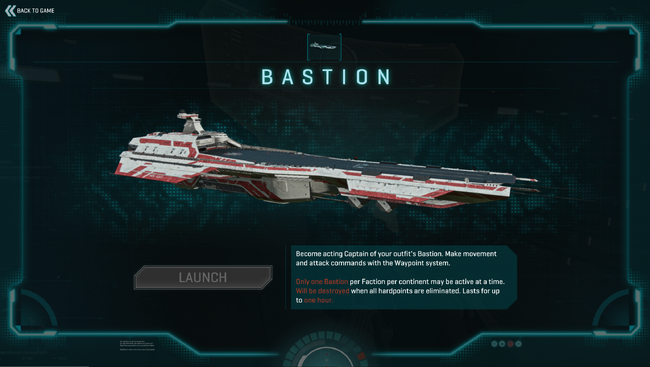 First image of bastion in game model on Dev stream.