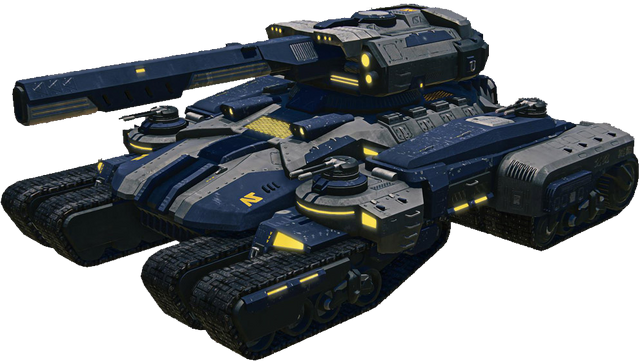 The Colossus Heavy Tank is a global war asset available to outfits. It is crafted using 15 Polystellarite, with a crafting time of 30 minutes, and can only be spawned at warpgates and tech plants.

The Colossus is a purpose-built anti-aircraft platform, with a particular emphasis on targeting Bastion Fleet Carriers, though still packs a punch against ground vehicles if needed. The driver has access to the main cannon, and up to four gunners can command a variety of turrets located on each corner of the tank.

Similar to the Prowler, the Colossus can deploy to augment the functionality of its main cannon. Deploying the vehicle activates Deployment: Skylance Battery, reconfiguring the main cannon into the Skylance cannon, projecting a cortium-powered bombardment shield around the vehicle, and highlighting Bastion hardpoints within 1000 meters.

The Colossus also has access to a cortium store allowing it to hold up to 10,000

in the tank and is refillable by ANTs or the Cortium Recycler logistics slot upgrade, and used to power the bombardment shield or Mass Accelerator Drive utility ability.

To deploy the vehicle, keep the vehicle still and then press the Deploy Vehicle hotkey (B by default.) 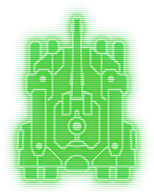 Emphasizing the vehicle's role as an outfit-related tool, the Colossus' certifications and weaponry replace Certification Points as a purchase method with Merit (

), though weaponry can still be purchased used Daybreak Cash.

With any Colossus weapon, it is possible to get both Ribbons and Medals. Each Ribbon is a standard reward for achieving a set amount of kills with a Colossus weapon. Medals relate to how many overall kills you have with Colossus weaponry.

The Colossus has access to five separate cosmetic customization slots, each modifying a different part of the vehicle.

Alongside the expected ability to add Camouflage and Decals, the player can modify the exterior of the vehicle, add lighting effects to beneath the vehicle's chassis, and add a trim effect to the body.

Though not necessarily defined as a cosmetic, the sound of the Colossus' in-built horn can also be changed.

Unlike other ground vehicles, the Colossus does not have the ability to have Ornaments attached.

Colossus has received the following adjustments to its default armor values.

Dev Note: The falloff adjustments take the Skylance's typical 6 shot kill at all ranges against a Bastion weakpoint to a 6 to 8 shot kill depending your distance from the target. The HUD indicators now disappear when the Bastion is at ranges at which it can't retaliate. These two changes should help prevent Bastions from being dominated from extreme distances by a target they cannot see.

Dev Note: This moves the total number of mines to kill a full-health Colossus from 4 to 6.

First official teaser of the Colossus