Directives is an achievement like system, that provides additional goals, and rewards for completing them. 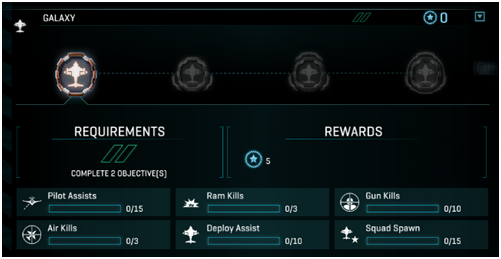 These are top-level groups of directives, usually with a similar theme, such as “Light Assault” or “Carbines” or “Liberator.” Directives in a tree usually have requirements in order for anything in that tree to count. For example, in order to get credit for Liberator directives, you must be in a Liberator. Same goes for Light Assault, MAX, etc.

Within each Directive Tree there are 4 tiers of completion. Completing tiers is how you earn rewards and directive points.

Each tier has a required number of directives within it that must be completed in order to complete the Tier. You typically do not have to complete every objective in the tier and can choose which ones you want from the set. As you progress through the tiers it requires more objectives to complete and the requirements for each objective increase. In the future we plan on adding to the rewards at each Tier and give you ways to show off your tier completion. For the launch of the Directive System only points are awarded at each tier, except for the final tier which has a unique reward.

These are the individual objectives within each Directive tree and tier.

We have several types of directives that follow a similar pattern.

If the Directive shows a medal, it means you need to earn the listed medal in order to complete the Directive. Next to the medal is the name of the weapon associated with the medal. Medals already earned prior to the release of Directives will count towards completing the Directive. If the weapon is not currently unlocked, you can unlock it directly from the directives UI!

If the Directive shows a Ribbon, then it means you need to earn the specified number of that type of Ribbon. Like Medals, this type of Directive is retroactive and will count Ribbons earned prior to the release of Directives.

Many Directive trees have objectives of the type “Belly Gun Kills” or “SMG Kills”. This type of directive requires you to use a certain weapon set or type in order to get credit. For example, the Light Assault tree has a “Shotgun Kills” Directive. To earn credit for this you must be a Light Assault class and earn kills using a Shotgun of any type. Similarly for the Galaxy and Sunderer there are “Gun Kills” which count kills using any gun in any position towards completing the Directive. Several vehicle directives have “Road Kills” as an objective, this means you must run over or crush enemy infantry with your vehicle.

Vehicle trees often have “Driver Assist” or “Pilot Assist” Directives. These are earned by being the driver/pilot of the vehicle while gunners in the vehicle earn kills. The pilot earns an Assist for the kill and that is what this type of directive is tracking.

Some Directives are tracking specific types of events that you earn. One example is the Medic tree has “Savior kills”, which requires you to both be a Medic and earn a Savior bonus when killing an enemy player.

Some trees such as the MAX, Lightning, and Heavy Assault have “Air Deterrence” directives. These are earned by doing damage to air vehicles. Each time you see Surface-to-Air XP bonuses you will earn credit towards that directive.

Directives that track “Vehicle Destruction” require you to kill an enemy vehicle. The number of occupants in the vehicle does not matter.

Directives in this category share a similar theme of mostly being Infantry-focused and are generally only earned by not being in a vehicle.

Only credited if you are the Infiltrator class and not in a vehicle. This tree focuses on the different playstyles available to the Infiltrator as well as their support role and counter-sniping or hunting enemy infiltrators.

Only credited if you are the Combat Medic class and not in a vehicle. This tree is about striking the balance between support and offensive capability as a Medic. Offensively this tree focuses on taking out enemy support, saving your teammates so you don’t need to revive them, and killing the enemy.

Only credited if you are the Engineer class and not in a vehicle (being in an Engineer turret is OK!). This tree focuses on the support role of the Engineer and the unique tools available to them.

Only credited if you are in a MAX suit and not in a vehicle. This tree focuses on the different roles and team value a MAX can provide.

There is no requirement on the tree for this due to the nature of the weapons. Weapons in this tree are here because many of them can be placed by multiple classes or persist after the player changes classes or gets into vehicles, such as mines.

Only credited if you are not in a vehicle (Engineer turret is OK). This tree is about more skilled infantry play, flanking, and team-assisting gameplay.

No infantry/vehicle requirements on this one. This tree is about Playing The Objective!

Directives in this category are all earned by being in a vehicle and have a mix of medals, ribbons, and specific objectives. Note: you may need to hop into the vehicle once for your existing medals and ribbons to be credited.

Only credited while in a Flash. This tree requires fewer objectives at each tier than most.

Only credited while in a Harasser. We did not want to bloat this tree with every weapon so only a select few were chosen, but all count for Gun Kills.

Only credited while in a Lightning. This tree focuses on the different roles the lightning as well as all of its armament options.

Only credited while in one of the MBTs. All three MBT trees are identical.

Only credited while in a Sunderer. Oriented around almost pure support, the Sunderer is a bit different from most vehicles in that it has no specific weapons available for directive progression.

Only credited while in an ESF. The ESF trees are more solo-player oriented with all weapons available for directive progression. Additionally, Air Superiority ribbons are also available.

Only credited while in a Liberator. This tree is similar to the MBT trees in that the driver’s weapons are available for progression, but the rest of the tree is about the Liberator’s role as anti-Tank and anti-Air.

Only credited while in a Galaxy. Part support, part combat vehicle, the Galaxy’s directives focus on its role as a combat dropship.

All directives in this category are based on medals earned. These directives formalize what many players were doing already by collecting Auraxium medals. They are all retroactive like all medals. These are self-explanatory so they won’t be outlined in detail.