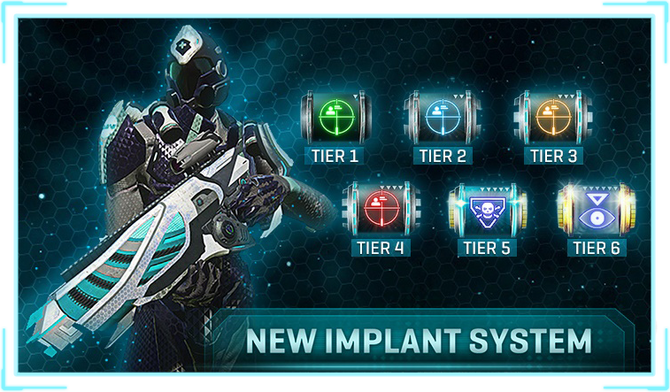 Implants are permanent items that can be used to enhance your soldier with gameplay perks. Implants can be obtained from the Depot for Certification Points or Daybreak Cash, in packs of 3 or 9 or crafted using ISO-4. The Safeguard and Target Focus implants are given to everyone by default.

Implants are equipped on the loadout screen next to your melee weapon. Two different implants can be equipped at a time.

Icons of the equipped implants will appear on the player's Heads Up Display (HUD).

The primary way of obtaining implants is through buying Implant Packs in the Depot. Implant Packs contain the stated number of randomly-selected implants, including duplicates. Various implants have different drop rates, ranging from Common with the highest drop rate to Exceptional with the lowest drop rate.

ISO-4 is the currency used for upgrading basic implants to Tiers 2 through 5, and for buying ISO-4 Recycler packs in the depot which grant one random implant of a rarity greater than Common.

ISO-4 can be obtained by breaking down duplicates of implants and participating in the Alerts. Winning an alert awards the dominating faction with 300

and the two opposing factions with up to 150

. Each Tier-1 basic implant breaks down to 25

and each Exceptional implant to 500

All unowned non-exceptional implants can be crafted using ISO-4 from the implants tab of the main menu.

Every non-exceptional implant can be upgraded with ISO-4 from Ranks 1 through 5. Implant rank determines upgrade cost.

An additional way of getting implants is via directives.

Finishing the novice rank of any non-MAX class-specific directive will grant a Novice Implant Pack.

Finishing the novice rank of an objectives directive and the adept rank of a leadership directive will also grant one Basic Implant Pack each.

Safeguard is one of the two initial implants. It is recommended for new players, who tend to be in exposed areas and near strategic chokepoints such as doorways, because it increases their survivability after being revived by teammates, possibly letting them quickly move back to cover without being repeatedly instantly killed.

Target Focus is one of the two initial implants. It is recommended for new players, as it extends crosshair IFF (Identification Friend or Foe) range from 8 to 55 meters, allowing the player to easily distinguish enemies from allies at longer distances. It is helpful to snipers, giving them a longer time to steady their aim using high-magnification scopes on sniper rifles. It is also helpful to vehicle gunners by helping them prioritize targets.

The ability to see a targeted enemy's health does not include seeing their shield health or status of the heavy assault over-shield.

Ammo Printer allows infantry and a player's own nearby vehicle to resupply on the go, without needing engineer ammo packs or vehicle ammo towers and pads.

It is useful for vehicle owners, for non-engineer players who prefer keeping their distance during combat, and for players in situations where they survive well yet keep running out of ammo.

Regeneration allows infantry to passively regenerate health similarly to the bio lab faction-ownership benefit. It is especially useful for players who prefer using cover and ranged combat, and for players preferring more aggressive options for their utility slot instead of medical and restoration kits.

The vehicle collision damage reduction only applies to the player as infantry, not to their vehicle.

Sweeper HUD automatically spots nearby enemy explosives. It also shows at the bottom right of the crosshair the centered object's distance from your camera view.

Vampire restores health for each melee kill while wielding a knife, and also while wielding a sidearm at Rank 5. Vampire is most useful in tandem with the carapace implant in order to maximize healing potential.

Assimilate restores shield health upon a headshot kill. It's not very helpful to most players, since it requires a very high headshot kill ratio to receive its benefit consistently.

Battle Hardened reduces camera shake and flinch from explosions and bullet impacts, making it easier to keep a steady aim while under fire.

The Rank 5 bonus increases jump height by about one meter, making accessible locations and routes that are usually inaccessible to non-light assault infantry.

Ocular Shield is an uncommon implant that reduces the duration and effectiveness of Concussion, Flash, and EMP Grenades.

Does not stack with Flak Armor.

Without this implant, a player must be crouching to remain undetected by motion sensors.

Aerial Combatant is an implant that restores jump jet fuel upon killing an enemy.

Paratrooper restores jump jet fuel upon taking damage and its implied application is to use drifter jump jets to glide over stationary vehicle targets and drop explosives below after exiting the seat of an overhead aircraft.

Combat Surgeon restores nano-regen device ability energy on kills and revives. The Rank 5 bonus does not stack with nanoweave armor.

Nanomesh Specialist reduces the rate of decay of the Heavy Assault overshield. This is very effective for the Resist Shield as it can increase its duration up to 75 seconds.

Rank 5 grants an engineer's deployables auto-repair at 25 health per second; this regeneration is not applied to the engineer.

Assassin can clear 2d and 3d spotting after killing an enemy. Besides its Rank 5 bonus, it is useless for the infiltrator class because cloaking removes being spotted anyway.

Fortify requires interacting with a control point, which can be done by walking up to the control point beacon and holding the use key. This bonus is lost when you enter a vehicle or turret. If the bonus is lost this way, you can immediately regain it again without waiting for the full 15 second cooldown.

Using any sort of equipment or reloading will immediately uncloak the player.

Symbiote will damage a player over time and make a burning sound at each gnaw, yet not kill them. Players using this implant may want to stay near an allied medic who can heal them. The player does not take periodic damage while inside a vehicle.

Carapace replaces an infantry's 500-health shield (400-health with infiltrator) with a second meter of 500 health, similar to MAX units. The main benefits of this include not losing shields from EMP grenade explosions, the ability to use the various means of healing to be restored to full health, and not needing to wait for the shield to recharge.

Note : this replaces the infiltrator's 400-health shield with 500 health, effectively increasing the total damage they can take up to 1000 (like all the other non-MAX classes) instead of 900

Experimental Stims randomly applies one of three buffs, improving either sprint speed, reload speed, or small arms resistance for about eight seconds after the player uses a medical kit or restoration kit.

Infravision applies the Night Vision Scope effect at all times, with all its benefits and disadvantages.

Logistics Specialist allows squad mates to spawn into any vehicle that has a free seat, while usually it's only possible to spawn into a squad member's galaxy, Sunderer or Valkyrie.

Minor Cloak renders its user transparent, similar to the infiltrator cloak, after standing or crouching still for 8 seconds.

Phylactery lets the user revive themselves to 50% health once they have 50 charges. Any type of XP will give a charge, as long as you are not in a vehicle or dead.

This implant was originally available as a reward for completing the Nanite of the Living Dead event directive, but is now accessible at all times as an exceptional implant.

"Perfect" Implants currently can only be acquired via Ancient's 7-Year Anniversary Bundle, they are available account wide and cannot be scrapped.

Carapace replaces an infantry's 500-health shield (400-health with infiltrator) with a second meter of 500 health, similar to MAX units. The main benefits of this include not losing shields from EMP grenade explosions, the ability to use the various means of healing to be restored to full health, and not needing to wait for the shield to recharge.

Recently a new roadmap thread detailed some changes to implants based on feedback, the article has been updated to reflect this.

Nearing the release of Implants, Matthew Higby created a post detailing some of the upcoming items in Game Update 13. Some of which detailed the upcoming Implants, their abilities, and cost. These costs were in the form of certs and station cash and they decayed over time. The community at large disagreed with this and many believed they should be available permanently for large cert costs or via infantry resources. As a result of this feedback, SOE delayed Implants to change them up and take community feedback into play.

"After reading through your comments we have decided to go back to the drawing board on implants. They will not be coming with GU13." ~John Smedley (Tweet 1) (Tweet 2)

During development of Implants, there were three tiers of the implants with different icons similar to the design of Boosts. Some of these implants were removed, while others remained the same or merely changed names.

The pool of implants has been doubled. These implants have been added to the normal implant crates, alongside the ability to craft the implants you want with ISO-4. More about that below.

Dev Note: The rank 5 bonus and progression from ranks 1-4 have been swapped, and increased to be more useful in more situations.

Retrieved from "https://planetside.fandom.com/wiki/Implants?oldid=96744"
Community content is available under CC-BY-NC unless otherwise noted.