Prototypes of the MAX suit used on Auraxis today were created after the New Conglomerate began modifying powered exoskeletons intended for mining operations, wielding shotguns and homemade composite armor to them for use in combat. After their potential for both saving and taking lives was realized, revisions to the initial design were quickly adopted on by all three factions. The end result is a lumbering juggernaut capable of adapting their flexible weapons systems to a variety of situations while absorbing immense amounts of fire.

Despite lacking the shield generator that another infantry possesses, the heavily armored MAX suit is able to take incredible amounts of punishment, especially from small arms fire. The latest models are equipped with composite armor consisting of advanced alloys and ceramics, a vast improvement from the early prototype's roughshod protection. Anti-tank weapons are recommended for taking them head-on, as small arms will require multiple reloads before a MAX goes down.

The servo-stabilized suit affords them a suite of high-powered, low-recoil weapons. The arm-mounted weapons system boasts incredible customization, allowing the user to mix and match anti-infantry, anti-vehicle, and anti-aircraft weapons for nearly any combat situation. MAX veterans will first scope out the battle before choosing their weaponry, as choosing the proper loadout for a fight makes all the difference with their specialized weapons.

The hulking MAX suit has established itself as an unpredictable soldier capable of taking on a variety of threats with proper planning. While their reduced mobility and reliance on friendly Engineers for repairs has prevented entire armies from being replaced with them, any empire without MAXes will quickly find themselves at a severe disadvantage. Maxes also are the only class that cost nanites to spawn. MAXes can be vulnerable to quicker moving infantry, even with their large resistance values against small arms fire a nimble soldier can outmaneuver a MAXes guns and dish out serious damage.

How to spend your first Certification points:

What to buy next?

Are there any Certificates that I should not pick up or should save for later?

The following weapon types are available to the MAX class:

Certifications for the MAX are broken down into four categories: Suit, Abilities, Weapons and Passive Systems. Because of the small number of certifications and the limits placed on the MAX class, builds are relatively simple to understand. Your Suit is going to be the biggest concern when deciding which build to use. You really need to decide the type of MAX you prefer to play and then choose your certifications from there.

Your other certs are passive and are really just icing on the cake. The ammo storage container allows the MAX to carry an additional magazine of any ammo type per level of the cert up to 5. Finally, you have weapons certs. When you do not have these certifications, your MAX can only equip an anti-infantry weapon in your primary weapon (left-mouse attack) slot, and an anti-vehicle weapon in your primary weapon 2 (right-mouse attack) slot. Taking these certifications allow the MAX to equip these weapons in either slot or both slots. In addition, upgraded weapons are available to you through certifications.

Strategy Overview The MAX or Mechanized Assault Exo-Suit is a heavy infantry class that is a step-up from the Heavy Assault class. The MAX is considered a vehicle because of its size and weaponry. It can take a massive amount of damage and has some of the most devastating weapons in the game. The MAX can take three roles on either the defensive or offensive side of the battle. The first role is an anti-infantry role. For this role, the MAX has one option for weaponry, the empire anti-infantry weapon. The empire weapons are more suited to longer-range, outdoor infantry battles. The MAX can also serve an anti-vehicle role. For this, the MAX equips a unique grenade launcher style weapon. This weapon has the standard arcing shot one would expect from a grenade style weapon. Finally, MAX can take an anti-air stance with the Burster. The Burster is a flak cannon that explodes when fired near aircraft. It does massive damage to the armor of aircraft. MAX serves well as a mobile air defense turret. The MAX can combine any two of the three roles by equipping a weapon of each type on each arm. This, however, cuts the effectiveness of each role by half.

The MAX does have some limitations. The MAX cannot pilot a vehicle because it too is a vehicle, and a MAX has an acceleration and deceleration timer. The acceleration/deceleration applies when a MAX is sprinting. When a MAX sprints it takes a few seconds to get to top speed and then also takes a few seconds to decelerate to normal speed. While sprinting a MAX cannot use its weapons and also needs to decelerate fully to normal speed before it can fire. It should also be noted that MAXs cannot influence any security terminals that are needed to capture a base.

There are really two ways to play, solo or in a squad. Being in a squad is always preferred to going solo because of the many advantages it gives you. Solo play is going to be the most difficult but can be employed for things related to base defense. The reason base defense can be performed solo is there will generally be others around to help out should the need arise. Also, the anti-air base defense can be done solo because you will position yourself at a high point on the base such as the roof or towers. Support is good for these situations, but not essential because it will be difficult for enemy infantry to attack you due to shields and the defending infantry. Chances are if enemy infantry gets to you on the roof of the base, the base is lost anyway. Squad play is always better, in all situations, because you can have an Engineer to heal you, and you will have infantry support to watch your back.

The first anti-infantry situation is a base defense situation. In this scenario, staying close to key defensive points and digging in is a good strategy. MAXes are not as mobile as other infantry classes and are very easy to spot. Using a building's doorways and obstructions to your advantage is the best plan. Running out into the open with a lack of mobility is a bad choice when facing an invading force. Find a building near a key defense point and monitor the point. If an enemy wanders nearby, engage them from inside the building. Only leave the building when you are sure that there aren't more enemies waiting around a corner for you to emerge.

Another situation is the taking of a base. For this situation, the best weapon choices would be one anti-infantry weapon and one anti-vehicle weapon. When approaching the base there are sure to be multiple vehicles and it is always good to be prepared for that situation. Stay in the cover of trees and rocks and even buildings when approaching a base. Survey the landscape and get an idea of the locations of troops. Move in slowly, keeping to cover whenever possible. You can then send out a squad mate to draw fire to get enemy locations and then move out of cover to take them out.

Finally, there are the in-between fights that happen outside of bases either in defense or offense. For these situations, find cover and locate enemies. Once enemies are found, try to determine the best route to get to them without getting flanked. One on one the MAX will win most battles with infantry, but a squad of good players can take out a MAX pretty effectively.

The anti-vehicle strategy is pretty straightforward. Survey the area where the vehicles are located and take them out. The MAX is uniquely suited to this task compared to other infantry classes. For one, the MAX can fire multiple projectiles without needing to reload, unlike the Heavy Assault class which needs to reload after every shot. Another advantage of the MAX is the ability to carry massively more ammo than the Heavy Assault class. The main thing to remember when firing is the arc of the anti-vehicle weapons. They are like a grenade launcher and the shots have a slight arc to them. You must aim high when shooting from a distance or the shot will fall short. Take a single shot to gauge the distance and adjust accordingly. Once you have the arc calculated, you can unload multiple shots at the target. If you are very close to the vehicle you will not need to aim high because the arc is minimized when closer to the enemy. With practice, you will be able to take shots without even thinking about it. Warning: Raven for the NC MAXes don't need to aim high at all as it is laser guided. Also, the VS empire specific grenade launcher, the Comet VM2, trades smaller magazine size for no bullet drop, giving it long range anti-vehicle capabilities.

Anti-Aircraft techniques are pretty straightforward as well. Find a base with lots of enemy aircraft, find some cover, and take them out. The Burster is a great anti-aircraft weapon and fires very quickly. It explodes when near the enemy aircraft, so keep an eye out for the explosion to ascertain if you are hitting it. The main thing to remember is to lead the target. Aircraft will be moving most likely and you will need to shoot ahead of the target to give the round time to connect. For offensive base attack technique, find some cover such as a large rock or tree and hide near it. Hit C to crouch and lower your size then fire away. It is always good to have a squad covering you for these types hiding spot is in the small valleys made by terrain on cliffs. It is hard for the aircraft to see you and infantry will have a hard time locating you as well. Base defense is another anti-air role the MAX excels at. Find a high spot on the base, such as a tower or roof and open fire. It is a good idea to survey the area and try to find out where the aircraft are concentrating their attack. Use that information as a guide for placement. Try to place yourself in within cover that is able to protect at least two sides of your position, while leaving a good view of the field of battle.

With any class, you have the ability to gain Ribbons which will further increase your experience and certifications after completing specific tasks. This list does not include possible vehicle, base capture, or kill/assist related ribbons while playing in a vehicle as that class. 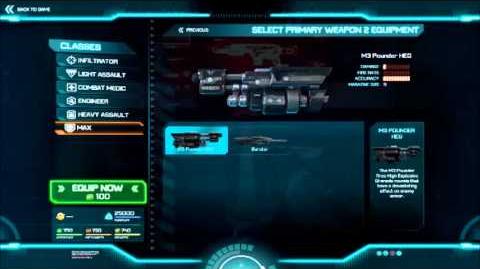 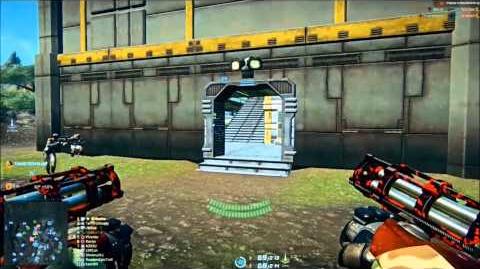 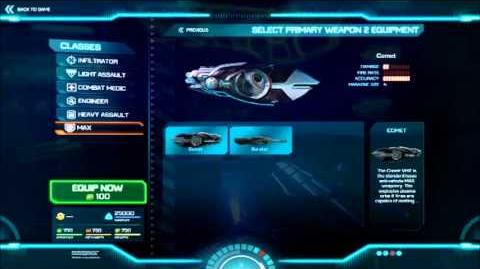 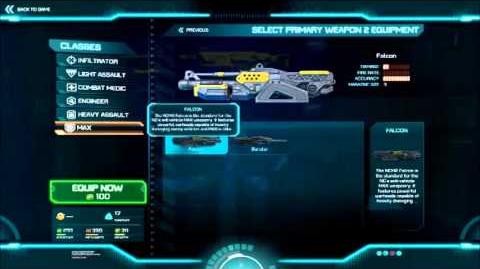 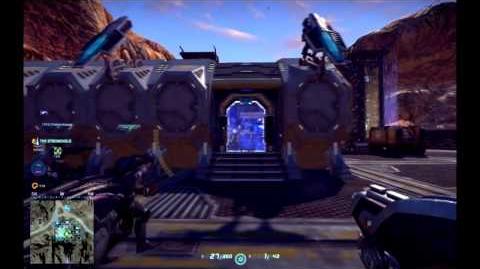 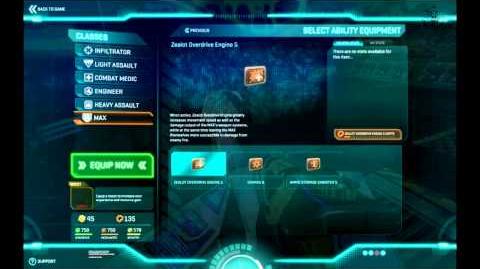 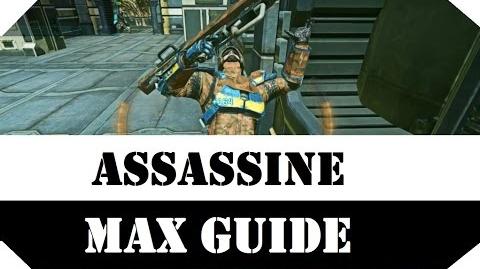 Advanced Max Guide (Assassine MAX)
Add a photo to this gallery
Retrieved from "https://planetside.fandom.com/wiki/MAX?oldid=104640"
Community content is available under CC-BY-NC unless otherwise noted.