The NS-11A Assault Rifle, is a common pool weapon available only to the Combat Medic. The most expensive assault rifle in the game at 1000 Certs or 799 DB but this cost comes with some unique traits that set this assault rifle apart from the ES (Empire Specific) Assault Rifles.

The NS-11A is a highly versatile assault rifle with minimal recoil, a highly desirable 25% (0.75) movement speed decrease when ADS (aiming down sights) as well as a bullet velocity barely slower than the fastest sniper rifles (excluding the Railjack) in addition to access to high-velocity ammo. It has 5 more rounds in its magazine than its VS and NC AR counterparts but still falls short to the unrivaled magazine sizes wielded by the Terran Republic. It possesses a lightning fast reload similar to the Vanu Sovereignty's, further signalling that it is a mix of all three faction traits. Nanite Systems weapons give off a bright white bullet tracer and unique audio when firing that makes determining faction affiliation difficult to enemies.

Overall, the NS-11A is an accurate and controllable assault rifle with a below-average rate of fire. The lower RoF is not a bad trait as it renders the gun very easy to use at longer ranges, however the gun still fares well to close-quarters engagements even though its theoretical TTK (time to kill) is somewhat lower in comparison to most weapons that you are facing at close range thanks to its tight hip fire. This gun is best used as an all-rounder weapon that can manage any situation, but should be switched out if a battle is permanently stuck at unique ranges.

It is possible to get both Ribbons and Medals for using the NS-11A. Each Ribbon is a standard reward for achieving a set amount of kills with the NS-11A. Medals relate to how many overall kills you have with the NS-11A.

Ingame model.
Add a photo to this gallery 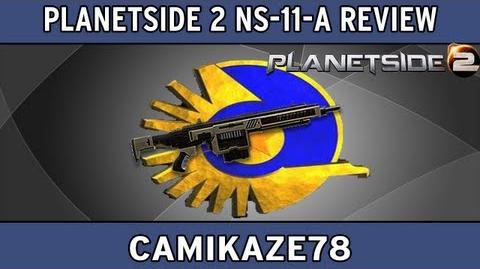 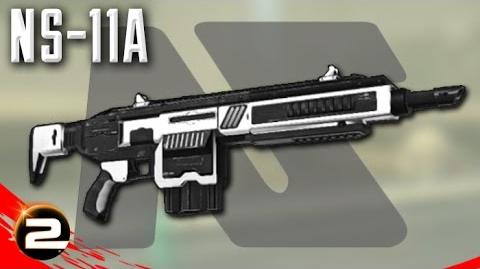 NS-11A review by Wrel (2015.04.08)
Add a photo to this gallery
Retrieved from "https://planetside.fandom.com/wiki/NS-11A?oldid=96356"
Community content is available under CC-BY-NC unless otherwise noted.