The NS-30 Vandal Scout Rifle is a Common Pool weapon available only to the Infiltrator. It is tied with the semi-automatic, faction-specific scout rifles as the most expensive scout rifle in the game at 1000 Certs or 799 DC, but this cost pays for some unique traits that set this scout rifle apart from the ES (Empire Specific) Scout Rifles. Although it is a hard-hitting semi-automatic rifle, the NS-30 Vandal is best used at a medium range, where sniper rifles are unwieldy and anything else has difficulty with shot placement.

The Vandal, like other scout rifles, is used for infiltrators who prefer a more aggressive play-style over sniping. However, this weapon is still not suited to head-on engagements, as most of your opponents' arms will handily outgun the NS-30 when used out in the open. The weapon really shines when used on enemies that are distracted by your allies or weakened - with that high damage model, you can pick people off from medium ranges. One of its biggest advantages is the 25% movement speed reduction when when aiming down sights (down from the standard 50% reduction of most weapons), which allows you to be more mobile while firing. This trait can be used to turn around corners and retreat into cover while still remaining accurate.

Since the Vandal is a Common Pool weapon, it fires white bullet tracers instead Empire Specific colour tracers, and also has a unique report that confuses enemies. Because anyone can use Nanite Systems weapons, enemies will have to check to see if a friend or foe is firing. This gives you a chance to quickly dispatch them or escape.

The NS-30 is a heavily modified NS-1X. While NS-1X weapons are full auto and use bottom-fed detachable box magazines, the NS-30 is semi-auto and uses a fixed magazine loaded with en-bloc clips. When reloaded, the top of the Vandal is opened, a fresh clip is inserted down into the magazine well, and the top of the weapon is then closed. 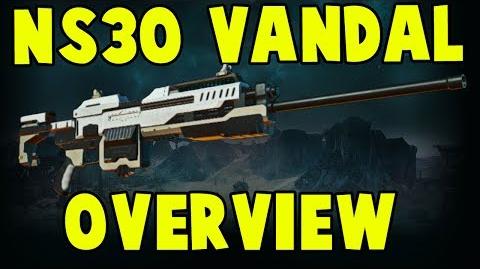 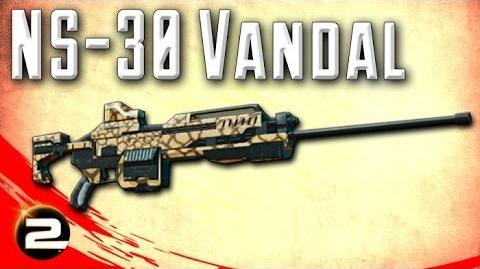 The NS-30 Vandal's magazine, being reloaded with an en-bloc clip.

The reloading bug. It has been patched.
Add a photo to this gallery

Retrieved from "https://planetside.fandom.com/wiki/NS-30_Vandal?oldid=92854"
Community content is available under CC-BY-NC unless otherwise noted.