The NS-44 Commissioner is the one of most powerful pistols in the game, but also has one of the slowest rates of fire of any pistols. The weapon can kill in three body shots at close range or two headshots. It can also kill infiltrators in one head shot or two body shots at close range. If you fire up to three shots the short reload is initiated, but if you fire four or more the long reload will be initiated.

Both the Underboss and Commissioner are heavy-hitting with a low rate of fire, and cannot be fitted with suppressors. They both kill in 3 shots at close range, but, generally, the Underboss takes one more shot to kill at longer ranges, while the Commissioner still retains its 3 shot kill. The Underboss has a quicker reload, shoots faster, but deals less damage.

The other thing with pistols is you generally use them in a panic once you're out of ammo on your main gun, if you're at range, you won't need a pistol as you can take cover more easily, so having a long ranged pistol is a non-plus.

With this in mind, the Commissioner serves better when the user will rely on it over their primary weapon, such as an Engineer providing support with the NS-AM7 Archer, as the user can better control their engagement range and take advantage of the Commissioner's strengths. As a backup weapon, such as when getting ambushed while trying to snipe as an Infiltrator, the Underboss will provide a better chance of surviving in close quarters. 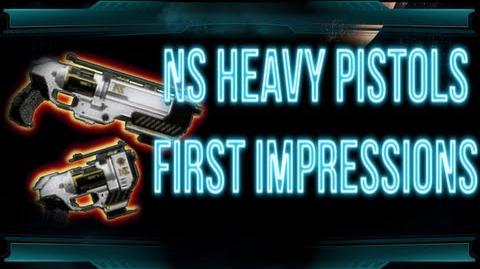 Retrieved from "https://planetside.fandom.com/wiki/NS-44_Commissioner?oldid=96779"
Community content is available under CC-BY-NC unless otherwise noted.