The NS-AM7 Archer is a Nanite Systems sniper rifle exclusive available to the Engineer class.

Archer can kill maxes in four body shots or two headshots up to 25 meters and seven body shots at long range. It is also capable of killing a stock MAX in two head shots in the specific damage range of 30 to 40 meters due to the additional explosive damage.

This weapon also can destroy small deployables in one shot and Engineer turrets in two.

Damage with Range: ( For Infantry )

Damage in range from 1 meter to ~30 meters will be lower due explosion not triggering. Increasing the number of shots to kill(For example preventing Infiltrator from being killed in one Headshot). 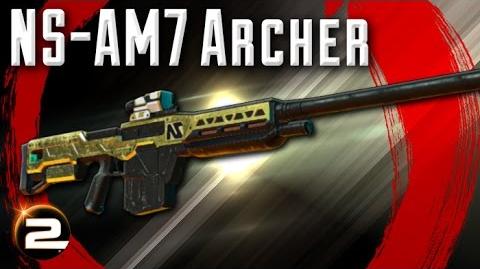