The NS Baron G5 is a common pool weapon available to all classes except the Infiltrator. The most expensive shotgun in the game at 1000 Certs or 700 SC but this cost comes with some unique traits that set this shotgun apart from the ES (Empire Specific) shotguns. The Baron sports a tighter cone of fire and higher bullet velocity, allowing it to be more effective at longer ranges than most other shotguns.

Damage with Range: ( For 1 pellet ) [ All pellets combined ]

Nanite Systems' first attempts into close-range weaponry resulted in the powerful Baron G5. The tube fed Baron is able to put down targets at longer ranges than typical shotguns thanks to its narrow choke.

Unlike every other semi-auto shotgun and like the pump-action shotguns, the Baron uses a tube-fed magazine, and each shell is loaded individually. The long reload speed of 0.58s is for the first shell, whether the gun is totally empty or has seven left using extended mags, and the short reload speed of 0.5s is for each subsequent shell.

Using slugs on this weapon is nearly pointless, since its bullet velocity advantage is completely erased. In effect, the Baron becomes a worse version of the other semi-auto shotguns. Those can reload more quickly and hold more ammo per magazine. It will achieve 2-shot kills before its damage begins to drop off however.

The Baron is also similar to the Jackhammer in many aspects, though the Jackhammer is better in nearly every way. Both have much longer damage drop-off ranges, for example, and start out weaker. Each pellet of the Baron matches the damage of most other shotguns (underbarrel, pump-action, and semi-auto) at 12.33m and is more powerful beyond that. Note that it has an additional pellet compared to the other semi-auto shotguns and also a much tighter choke, tying it with the Jackhammer for the lowest pellet spread in the game. It is not as accurate, however, because the Baron has a larger cone of fire. 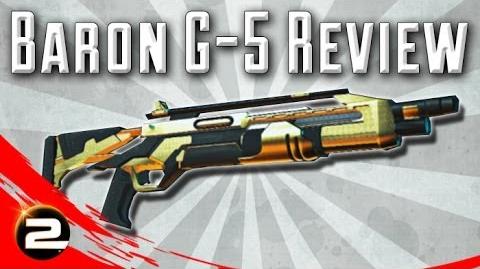