"Freedom Through Force.", "Freedom over Oppression.", and more commonly, "A miserable free man is better off than a contented slave."

The primary colors of the New Conglomerate are gold and blue. 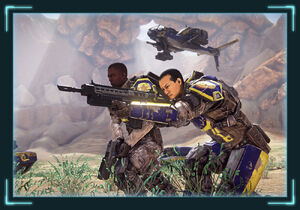 A loosely connected group of rebel factions and idealistic freedom fighters, the New Conglomerate fights against the hegemony of the Terran Republic. The New Conglomerate is a separatist faction determined to remain free of the controlling and domineering Republic. They feel that any form of control is oppression and that a miserable free man is better off than a contented slave.

The New Conglomerate (NC) split from the Terran Republic due to its totalitarian oppression and is now determined to write a new history free of the overbearing and draconian Republic. Now an empire in their own right they are in total open war with both the Terran Republic and the Vanu Sovereignty, seeking to free humanity from the tyrannical grip of the former, and defend them from the fanatical alien influence of the latter.

Since the start of hostilities, the unpredictable and ruthless tactics employed by the insurgent NC have allowed them to gain significant ground against the seemingly overwhelming TR military. Their methodology is to achieve victory by any means necessary and they are not afraid to use experimental weaponry, guerrilla tactics or unconventional warfare if the need arises. The New Conglomerate's philosophy of warfare stresses brute force, thus their tactics rely upon heavy tanks, hard-hitting weapons systems, and shields hoping to smash the enemy in the initial contact before they can react.

Notable quote regarding the Terran Republic

"This whole mess comes down to a bunch of military despots being unwilling to let go of the reins of power. We're not going to live under Terran Republic dictatorship any longer, and we'll fight them to the last man to show it. We won't stop until the people can control their own destinies; we'll live our lives, run our businesses, and raise our families - without the constant oversight of men with guns.”

Notable quote regarding the Vanu Sovereignty

"Seems like they've forgotten that it wasn't too long ago we were all in the same boat. Unfortunately, their fanaticism has become dangerous. Frankly, their "convert or else" attitude reminds me of the goddamned TR. There's no place for the Vanu Sovereignty in a free world because they refuse to respect my right to tell them to stick their tech where the sun don't shine." 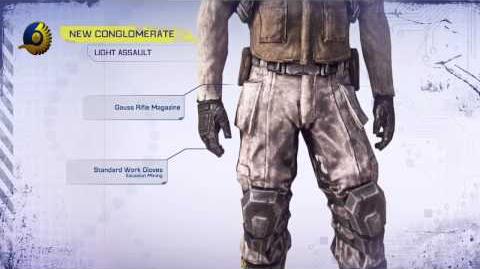 The New Conglomerate weaponry is built around hitting first, hitting the hardest and taking quite the beating in doing so. Although their weapons might not have the most finesse (often having a strong kick, long reload times, and slower firing rates), they do pack one hell of a punch. And while not blessed with the infinite resources of the Terran Republic, the New Conglomerate has managed to build up enormous reserves of weapons, armor, and vehicles which are well maintained. Their equipment might not be the prettiest on the battlefield, but the New Conglomerate's philosophy is that, so long as a weapon shoots straight, it will get the job done. This means to the Freedom Fighters that there is an incredibly diverse range of weapons and gadgets to work with. In terms of how their weapons are powered, instead of plasma reactions used by the Vanu Sovereignty or the traditional method of a firing-pin explosion used by the Terran Republic, the New Conglomerate's firearms mostly consist of a method that is powered by gauss/electricity coils. This gives many of their weapons a blue-electrical flash when they're fired, and produces a more unique sound rather than a typical "pop" sound or the sound of a laser burst.

On the vehicle side of things, the New Conglomerate has two unique empire exclusive vehicles, the Reaver- an attack fighter and the Vanguard, the main battle tank. Whether in the air or on land, the NC vehicles pack on more armaments and armor as well as abilities that allow them to stay in battle longer than the other empire's counters. While the NC vehicles excel in durability and sheer firepower, the chink in their thick hide is the lack of mobility and speed.

The Reaver may be slower to fire and move, but it makes up for it in sheer firepower and damage output. The Reaver boasts excellent durability, the ability to pack on more armaments and armor, and when the Reaver's weapons hit their mark the enemy certainly knows it.