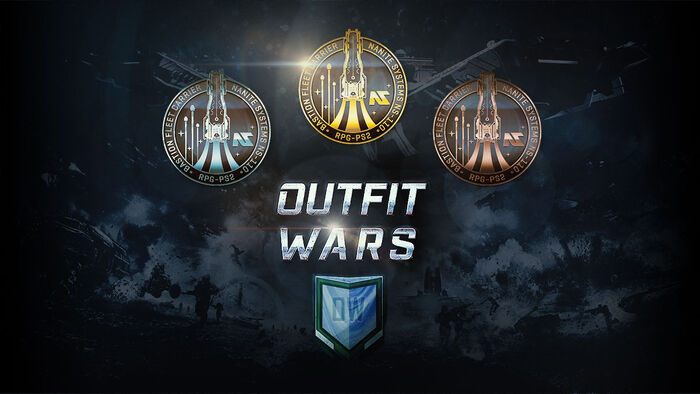 Outfit Wars is a tournament structure for competitive Outfits in PlanetSide 2. Outfits from every Empire and server region have the opportunity to opt-in to a seasonal Qualification cycle, before squaring off in epic GvGvG battles on Desolation, an asteroid Battle Island built for competitive play and far away from the planet Auraxis. Outfits compete in Qualifiers and Playoffs, with the top outfits from each region earning the right to represent their Empire in the Championship.

Outfit Wars matches are epic 48v48v48 player events between all three factions on Desolation, an asteroid belt harboring ancient Vanu relics located in deep space, far from the war on Auraxis. Matches will begin with a 20-minute deployment period for each Outfit to get organized beneath a protective shield near their command center. After deployment ends, a 90-minute alert will kick in to determine the fate of the match.

The objective for each Outfit is to capture and control critical territories on Desolation – Vanu Obelisks – which accrue points for each second under that Outfit’s control. The only way to earn points is to capture and hold those obelisks, which will require exceptional coordination, skillful teamwork, and decisive tactics, with two other formidable Outfits warring over the same ground! The first Outfit to 750 points (or the Outfit with the highest score at the end of the alert) will have won the match on behalf of their Empire.

Participating Outfits will have their armory of War Assets available (with the exception of the Bastion Fleet Carrier), and can continue to craft Assets during the match. Each Desolation Command Center is fitted with a Cortium Silo housing 75,000 Cortium, along with pre-installed vehicle and air pads capable of spawning all standard vehicles. The Construction System can be used across all of Desolation, and Cortium nodes can be found scattered throughout. However, resources are scarce (you do not use nanites to pull vehicles, and Cortium is limited) so spend wisely! Time is your enemy, and your opponents will show no mercy if you burn through all of your resources.

Each Outfits is limited to 48 members, though if a player drops they can be replaced by someone warming the bench.

Victorious Outfits from each match (3 Outfits from each server region - 15 total) will earn a completed Bastion Fleet Carrier for their Outfit. And as a “thank you” for your platoon's hard work, the winning team members on Desolation will also be granted a special title to commemorate their valorous trials in the Alpha 1 preseason finals of Outfit Wars!

In Alpha Preseason 3, during a Qualifier match on Connery, two participating outfits willingly and knowingly teamed up against the third outfit, resulting in a 2v1. Wrel was quick to release a statement, saying that activities like this are considered "griefing" per Daybreak Games' PlanetSide 2 Code of Conduct:

“While there is to be a certain amount of focused fire and tense alliances expected in a 1v1v1 format, ... we also expect each faction to be playing to win. It goes contrary to the spirit of tournament format, and the game in general, when teams outright refuse to fight one another.”
— Michael "Wrel" Henderson, Lead Developer (2017–present) and co-producer (2021–present) for PlanetSide 2

As a result, he spoke of possible punishments for outfits engaging in such behavior, including but not limited to:

Each server featured 3 Outfit Wars matches (Gold, Silver, and Bronze) between the top-3 qualifying Outfits from each Empire within the region. Matches aired throughout the day on twitch.tv/planetside2, via hosted a squad of PS2 community streamers equipped with spectate tools (See casters).