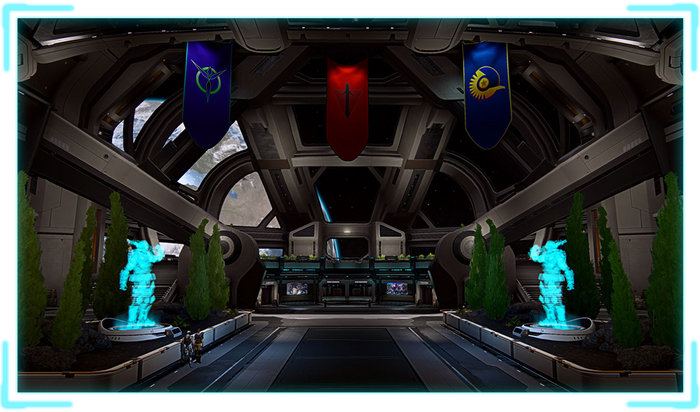 Sanctuary is a safezone in orbit of Auraxis. Made accessible early in 2020, Sanctuary is a space station orbiting the moon, a neutral zone owned by Nanite Systems where all conflict is forbidden.

"All empires are welcome aboard Sanctuary satellites. Soldiers take their rest, non-combatants live in peace, and merchants sell their wares."

Sanctuary hosts a variety of amenities, with many shops and most of the game's non-player characters only accessible aboard the satellite. While on Sanctuary, all players become unable to use any equipment except abilities, and fall damage is disabled. Players will appear on Sanctuary when logging into the game, and can leave or return at any time via the World Map menu, accessible from the Map or at any warpgate terminals.

If an instance of Sanctuary becomes overpopulated, it will become inaccessible and a new instance of the safezone will be created, accessible on the World Map screen.

Sanctuary was teased early after the game's release, with mentions in Friday Night Ops as far back as 2014 and screenshots of a then work-in-progress version of the station in 2015. The satellite began to make passing appearances in developer livestreams again in 2018, before finally releasing with Escalation in the March of 2020.

Many vendors make their home aboard Sanctuary, and their goods are only accessible when directly interacting with them on the satellite. All stores are found on the lower level of the atrium in the "northern" half of the station, and are marked appropriately with icons on the map in relation to their wares.

The Black Market is the leftmost store within the atrium, and is home to FL-34 and SPRK-33, two operatives known for their less-than-legal operations.

FL-34 hosts the implant foundry, allowing players to craft Implants using excess ISO-4 earned from breaking down duplicate implants. The foundry can also be accessed from the implants menu itself, and does not require interacting with FL-34.

SPRK-33 is the true shopkeep for the black market, and sells a variety of time-limited goods for A7 (

), which are not available from any other source and must be purchased from the operative directly.

Nascent Expeditions is the central store within the atrium, and is home to Representative Nalla and Coordinator Tolland, two New Conglomerate industrialists running a resource procurement business for Outfits.

Representative Nalla offers a selection of items—typically cosmetic—available for purchase with Campaign Standing, earned by participating in an active campaign.

Nascent Expeditions additionally features a Drop Pod terminal, allowing players to customize their drop pod with cosmetics they may have earned for it.

The rightmost store within the atrium houses most Outfit-related tasks, staffed by an outfit quartermaster and outfit recruiter. This store is also the workplace of Representative Ayla, who is responsible for the provision of equipment to those working on official Nanite Systems business.

The outfit quartermaster hosts a store of goods sold for Merit (

), which may require various levels of loyalty with the player's outfit to purchase.

The outfit recruiter allows players to search for and join or create outfits. The outfit browser can also be accessed under the Outfit button on the bottom of the menu, and does not require interacting with the recruiter.