Shotguns are the ultimate expression of close-range power on Auraxis, delivering extreme damage straight into enemies unfortunate enough to end up on the wrong end of the barrel. Though their range, in contrast, barely extends past spitting distance, their damage when they do get in range is hard to parallel.

Shotguns have a unique pellet spread mechanic that combines with typical cones-of-fire to restrict their range, and the variety of shotguns do little to combat this weakness. Instead, they offer varying amounts of damage output, different levels of difficulty to use, and ranging magazine sizes.

Three flavours of shotguns are available to those perusing the market; typical semi-automatic shotguns, like the

FA1 Barrage, offer a balanced pallet of stats, large capacity semi-automatic shotguns, such as the

NC12 Sweeper, offer a larger magazine in exchange for even less range, fully-automatic shotguns, including the

Pandora VX25, trade-in all their other stats for raw damage-per-second, and the two types of pump-action shotgun, represented by options like the

Veteran soldiers may also have the privilege of earning the option to select a shotgun in their secondary weapon slot as an Engineer.

Unlike other weapon classes, shotguns do not fire a single bullet when shot. Instead, shotguns are loaded with buckshot, scattering several pellets randomly to deal maximum damage at the cost of accuracy.

When the weapon is fired, a location is randomised as normal in the shotgun's cone-of-fire (displayed as a circle with a dot in the middle), and then a number of pellets are spread randomly around that location. Shotguns can deal partial damage, hitting with only some of their pellets whether through poor aim or bad luck, though are obviously most effective when all pellets connect with the target. This unique cone-of-fire mechanic also means that pellets can end up outside of the circle displayed on the screen, thus further reducing the effective range of shotguns.

The theoretical damage of a shotgun is based on two factors; the gun's damage, and the number of pellets it fires. Each pellet deals identical damage, even if more than one hit the target. The Mauler S6, for instance, deals 100 damage per pellet, and fires 6 pellets. This gives the weapon a maximum potential damage of 600 per shot, assuming all pellets connect, which can scale down for each pellet missed, down to 100 if only a single pellet hits the target. Only pump-action shotguns such as the Phobos VX86 or TAS-16 Blackjack contain enough pellets per shot to deal over 1000 damage in a single trigger pull.

Similar to bolt action sniper rifles, some shotguns feature a rechambering time. These are pump-action shotguns, and heavily sacrifice rate-of-fire in exchange for the highest potential damage-per-shot of any infantry weapon in the game, with the heavier second generation pump-action shotguns dealing up to 1375 damage when all pellets connect.

All standard shotguns have access to a unique attachment called Slug Ammunition. This condenses all the weapon's pellets into a single slug, that is far more accurate with a longer reach than the shotgun typically has. However, this does come at a cost to the weapon's damage-per-shot, with even pump-action shotguns struggling to achieve one-shot-kills with this ammunition type attached, requiring headshots. Essentially, the attachment allows the user to trade damage to partially cover the shotgun's major weakness; range. 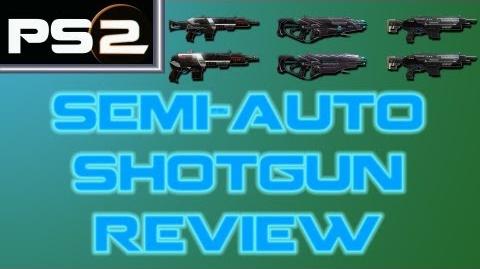 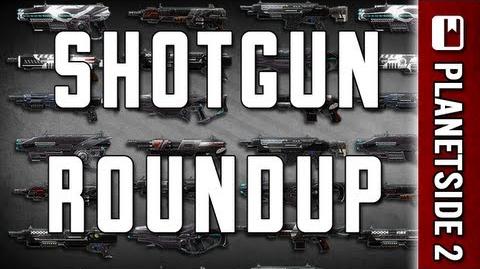 Shotgun Roundup (Which Shotgun is Best For You?) - PlanetSide 2
Shotgun Roundup by Wrel
Community content is available under CC-BY-NC unless otherwise noted.
Advertisement