Sniper Rifles are the masters of long-range combat on Auraxis. With slow rates-of-fire, an over-reliance on headshots, and wide minimum hip cones-of-fire, sniper rifles are almost entirely kept out of the close-quarters market, however their incredible damage-per-shot even at ranges exceeding hundreds of meters gives users the ability to reliably eliminate enemies at any range.

Sniper rifles are broadly divided into two overarching categories; semi-automatic and bolt-action, and then further divided into close-range and longer-ranged classes within those divisions.

Then, exclusively to bolt-action rifles, the longer ranged rifles are divided into high-capacity and high-damage categories.

shorter ranged and a high rate-of-fire,

high damage and incredible velocity, or

balanced and adaptable with a heat-based ammo pool.

Bolt-action sniper rifles available to the Vanu Sovereignty do not inherit the faction's 'no bullet drop' trait. This does, however, mean their muzzle velocities are equal to their cross-faction counterparts. Semi-automatic sniper rifles still enjoy access to this trait.

The engineer has access to a unique category of sniper rifle—'anti-materiel rifles'. These are sniper rifles chambered for an explosive, armor-penetrating round that is less effective against infantry but far more capable against armoured targets, particularly MAXes.

With any sniper rifle, it is possible to get Ribbons and Medals. Each Ribbon is a standard reward for achieving a set amount of kills with an sniper rifle. Medals relate to how many overall kills you have with the sniper rifle. 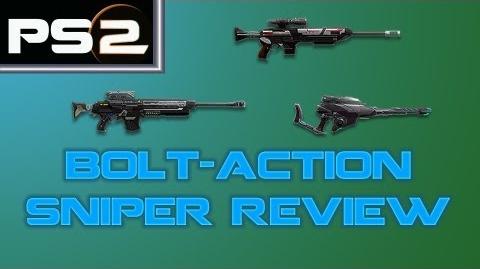 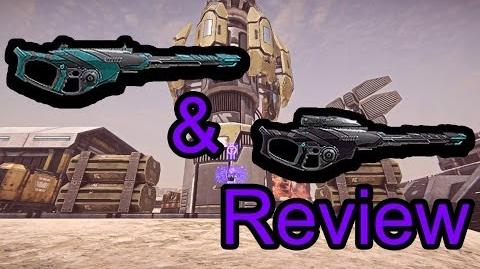