The TX2 Emperor is a pistol available to the Terran Republic. It is unlocked through purchase with Certification Points or Daybreak Cash.

The TX2 Emperor appears as a more balanced take on a sidearm as compared to the TX1 Repeater. Though sharing the same magazine size as the Repeater, the Emperor has a far higher damage-per-magazine thanks to considerably higher damage-per-bullet, though at the expense of overall damage-per-second. The Emperor is also more accurate and reloads a fair amount faster.

With the Emperor's numerous differences to the Repeater in mind, it is fairer to compare it to the

Beamer VS3. The Emperor has a larger magazine size, plus slightly improved performance at range thanks to one less tier of damage fall-off and higher muzzle velocity, though fires notably slower (400 RPM versus the Beamer's 451 RPM) and reloads a bit slower.

It is possible to earn both Ribbons and Medals while using the TX2 Emperor. Each ribbon is a standard reward for achieving a set amount of kills with the pistol. Medals are awarded upon reaching kill milestones with the weapon. 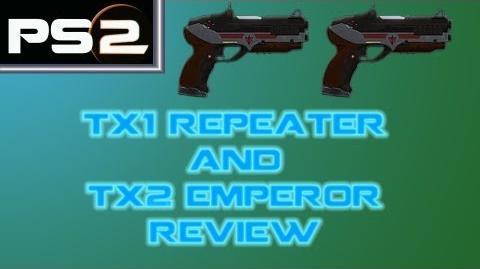