"Loyalty Until Death, Strength in Unity" 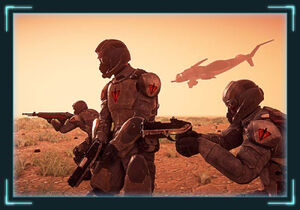 The Terran Republic (TR) is an empire with a rich history extending 1,112 years, and is the originator of the other two empires. They brought order out of chaos and introduced an era of peace to the world. Since the armistice and the formation of the new government, they were the singular political force on Earth, and they set up an open and transparent government. This helped keep the peace for nearly two hundred years.

The Terran Republic is built around order and the rule of law, with the central tenet that no individual is above the rules. Loyalty and fealty are core to the Terran Republic ethos and from that grows a spirit of total camaraderie and brotherhood amongst its proud and mighty warriors. More so than any other empire, the TR are a professional military. They are the most synergistic of the teams and benefit the most from numbers and coordination. A well-drilled squad of Terran Republic troops is one of the most fearsome and deadly forces you’ll ever meet on the battlefields of Auraxis.

Notable quote regarding the New Conglomerate

"We're stuck out here at the ass-end of space and these insurgents decide that now is the time to wage senseless political battles. The fact that they're willing to endanger civilians to further this power grab shows their true disregard for everyone's safety out here. They need to be eliminated, or we'll never know peace on Auraxis." ...

Notable quote regarding the Vanu Sovereignty

"They might have been human once, but not anymore. Whether it's their crazy alien-god bullshit or something more insidious, humanity has become little more than an obstacle to those freaks. You see your own brother hooked up to Vanu tech, you take him out - you're not family anymore. To him, you're just human rabble that needs to be 'enlightened'." 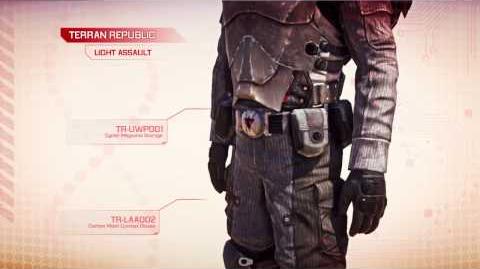 Their weapons and vehicles are top of the line and new but conventional. They eschew experimental ordinances and energy weapons and prefer to stick with what has worked for hundreds of years – accurate, high-velocity rounds, and lots of them. Terran Republic weapons have the fastest firing rates, largest ammo capacities, and are generally designed to allow for maximum sustainable damage. While their weapons have the highest rate of fire of the three Empires, they do not have as much damage on impact. Although, that extra bullet with that extra fire rate can really save your life in a firefight.

The Mosquito is an extremely agile attack aircraft, which can be outfitted with a variety of weapon systems to suit the needs of the republic. It also has the fastest top speed of any air vehicle allowing it to quickly disengage from a sticky situation and regroup. The Mosquito isn't the most controllable ESF, but in the right hands, it can wreak havoc among the other factions.

The Prowler is a medium tank that is the fastest MBT on the field. It is armed to the teeth with additional weapon systems not found in other empire medium tanks making it one of the deadliest vehicles in the game. Although you have less armor than to other Faction MBT, the speed and magazine can easily make up for that. With a magazine of two rounds and that speed, you can really get out in those smoking areas.

Retrieved from "https://planetside.fandom.com/wiki/Terran_Republic?oldid=89913"
Community content is available under CC-BY-NC unless otherwise noted.