A technocratic faction that believes humanity can only evolve by rediscovering and tapping the lost technology of the Vanu. The Vanu Sovereignty are a transhumanist cult of academics, intellectuals, and technology worshippers who believe that human destiny lies in the further development and exploitation of the alien technology. 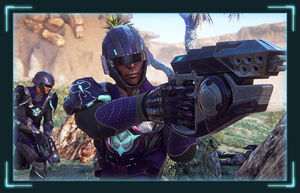 They have been called “Religious nut jobs”, “Techno-evangelist”, "Zealots" and a “Post-humanist Cult". The Vanu Sovereignty would find these terms foolishly dismissive and born of ignorance. They are what we would call true believers. Through the use of the mysterious Vanu technology, the group has invented exotic energy weapons and perfected the ability to modify and improve the human body. However, this alteration of the human species has generated great suspicion and hatred by the Terran Republic and the New Conglomerate.

The Vanu Sovereignty (VS) take their name from a long past alien race, the artifacts of which were discovered shortly after the first expeditionary forces from the Terran Republic arrived on Auraxis. Terran Republic scientists, working in forced secrecy, gathered and researched the artifacts extensively. From this research came the discovery of 'rebirthing' and, with it, the offer of immortality. Disillusioned by the oppressive conditions placed upon them by the Republic, and the inability to fully realize or share their discoveries with the Terran people, a group of Terran scientists and military officials began to collude in secret. As the group grew, the Republic became wary of unrest and attempts to quell the perceived uprising resulted in a bloody battle. This chaos saw the wholesale separation of the so-called 'Technolords' from the Republic and their subsequent declaration of themselves as the Vanu Sovereignty. The early Vanu Sovereignty leadership established the group's philosophy, namely that humans are still evolving, and that it is desirable and just that humanity exceed it's biological limitations through augmentation with alien technology. This philosophy advocates a shift from human to an elevated form of being, and can accordingly be considered transcendentalist.

Due to their extreme philosophy, the Vanu are viewed by many as zealots. Calm even in the heat of battle, and often considered by their enemies to be passionless, they are indifferent to the chaos of war, viewing it a necessary evil to ensure the advancement of humankind. The Vanu have adopted a condescending, yet oddly parental view of those who would actively oppose their cause, referring to them as their 'lost brothers and sisters.' Ranking themselves the harbingers of true freedom through enlightenment, the Vanu will take whatever means necessary to freely develop their technologies. They vow to destroy anyone that attempts to get in their way.

The Vanu Sovereignty has firmly pitted itself against the Terran Republic in retaliation for the years of oppression suffered under the regime. They have also responded in like to the New Conglomerate's declaration of war, classing them no different from the Terrans due to their shared ideals of government and animosity towards human modification. Destruction of both empires is held by the Vanu as the only avenue for the salvation of mankind. Ultimately (at least in word), the Vanu seek to share their 'blessings' of technology and knowledge with what they view as a struggling humanity.

Notable quote regarding the Terran Republic

"We would welcome our lost brothers and sisters, if only they would listen to reason. The TR has never been adept at listening. We must now fulfill humanity's destiny here on Auraxis and bring this world back into the light of Vanu. Only then will the non-believers understand their folly - and only then that we will take the next step toward our ascension. Nothing will stand in our way"

Notable quote regarding the New Conglomerate

"Freedom is their war cry, yet they shackle themselves to irrelevant concepts like 'government' and 'business' that only serve to enslave them in the end. True freedom lies in understanding the will of Vanu, for the shackles that burden humanity are only broken in enlightenment. We will show them." 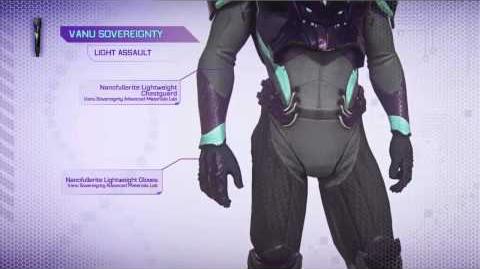 The Vanu Sovereignty took advantage of the alien tech, embraced evolution and change and have “received” the offering of knowledge and power from the ancients.

The VS weapons rely on quickly energizing a splash of plasma-like ammunition that destroys the very bonding attributes of the elements that make up the armor and the flesh of enemy combatants. Although it does not have the impact of the NC weapon systems, nor is it able to equal the rate of fire of the TR weaponry, it is incredibly deadly over a wider area due to the viscosity of the energy. All VS weapons benefit from the lack of a concussive round. The drawback to having this high accuracy is the degradation of potency over distance. While conventional weapons have bullet drop, VS weapons suffer from a reduction in power over the distance traveled (if the weapon is the first sniper) and other weapons may keep the same power over distances and gain a low amount of bullet drop.

Two unique empire vehicles are utilized by the Vanu Sovereignty, the Magrider battle tank, and the Scythe fighter. The use of the ancients’ technology has given them the ability to create some powerful weapons for use on the battlefield with their vehicles. The Heavy Rail Beam and Pulsed Particle Accelerator are a testament to the wonders of the Ancient tech.

The Scythe, the Vanu Sovereignty manned flight vehicle, rules the sky with maneuverability and agility. It uses the magnetic field of the planet Auraxis to move in ways other conventional aircraft cannot. The Ancients' technology will be pitted against the human’s inventions on the battlefield and it is yet to be seen which side will emerge victoriously.

The Magrider medium battle tank demonstrates perfectly the Vanu Sovereignty's phrase “Technology equals Might”. The Magrider can levitate over all terrain types with ease and be equipped with a wide variety of powerful energy weapons. Even the basic Magrider weaponry starts with the Supernova PC, which can focus a blast of pure energy that penetrates even the heaviest of armor. Due to their ability to hover, they can strafe right and left, easily dodging rockets and the like at medium to long range, while still keeping their target in their sights.

Deutsch
Community content is available under CC-BY-NC unless otherwise noted.