As a first-person shooting game, PlanetSide 2 has a slew of in-depth mechanics that dictate the firing characteristics of every gun in-game to give them unique firing mechanics to each other. Below, every stat relevant to infantry weaponry is explained in detail.

Measured in rounds per minute (RPM), fire rate is the theoretical, average number of rounds a weapon can fire in one minute if it had infinite ammunition. This stat ignores a weapon's magazine size or heat capacity, and for non-automatic weapons, it assumes the trigger is pulled as fast as the weapon can theoretically fire.

Internally, PlanetSide 2 uses refire time to dictate a weapon's fire rate. A weapon that lists a fire rate of 600 RPM, for instance, has a refire time of 100ms, meaning there is a space of 100 milliseconds between each round fired if the weapon is fired at its maximum potential fire rate.

Single-shot weapons like tank cannons derive their fire rate from their reload speed.

The speed of the bullet, in meters per second (m/s). Bullets fired from a weapon with a muzzle velocity of 500m/s take 1 second to travel 500 meters and 2 seconds to travel 1000 meters, as an example.

Several attachments can affect the muzzle velocity of attached weapons, either positively or negatively.

Certain rocket launchers have their muzzle velocity vary based on their fire mode, as well as over time after being fired. Rocket launchers with the capability of locking onto targets, such as the Hawk GD-68, will accelerate from their starting muzzle velocity up to a much higher velocity if fired with a successful lock.

Many vehicles, as well as MAXes and infantry with Nanoweave Armor, take reduced or increased damage from most weaponry.

Depending on the area hit, infantry take increased or reduced damage from bullets as well. Various weapons also have different multipliers for headshot damage.

The damage dealt in the immediate area surrounding an explosion. Typically does less damage the further away the victim is.

The short reload of a weapon is the time taken, in seconds, for the magazine to be replaced if there was at least one round left in the chamber when it was initiated. It is typically shorter from the long reload.

The long reload of a weapon is the time taken, in seconds, for the magazine to be replaced if all rounds were emptied from the gun. Internally, this is the weapon's reload time plus a "chamber time".

Only the short reload time must pass before rounds are added to the magazine, even if a long reload has been incurred. Once this time has passed, the user can put away their weapon (such as by changing to another piece of equipment or using Quick Melee) and, when they equip that weapon again, the magazine will be refilled even if the animation was not passed.

The number of rounds, in reserve, the given weapon has. If this number reaches zero, the weapon cannot be reloaded.

This can be replenished at an Ammunition Package for infantry weaponry, a Ammo Dump Tower for ground vehicle weaponry, or a Landing Pad for aircraft weaponry.

It can also be increased through various upgrades, such as Ammunition Belt.

The number of rounds in the weapon's magazine. This number simply measures the amount of shots that can be fired without requiring a reload. If the magazine size reaches zero, a long reload is forced.

If the ammunition pool is empty, the magazine cannot be replenished.

The raw amount of heat the weapon can generate before overheating. If the heat recovery delay is allowed to pass, this will begin to dissipate at the rate dictated by the weapon's heat recovery rate. If the weapon generates heat that causes it to exceed its capacity, it will suffer the overheat penalty.

If the heat capacity is below maximum and the weapon has not suffered the overheat penalty, it can be fired at any time even if the heat is currently dissipating.

Every time a heat-based weapon fires, it generates heat that is added to the heat capacity. This varies from weapon to weapon, and it will always be the same for that weapon. If the heat generated would cause the heat capacity to overfill, the overheat penalty is incurred.

This delay is ignored when an overheat penalty is incurred, as that is suffered instead.

If the weapon is fired 12 times consecutively, it will have generated 240 heat. After a 0.5s delay, the weapon will begin to cool at a rate of 240 heat per second. After 1 second, the heat capacity will return to zero.

If the weapon is fired 50 times consecutively, it will have generated 1000 heat. This incurs the overheat penalty. After 3.28 second delay, the weapon will begin to cool at a rate of 240 heat per second, and cannot be fired until the heat capacity reaches zero. After about 7.4 seconds, the heat capacity will return to zero.

The cone of fire is a theoretical cone that extends from the centre of your screen. It dictates the area that your bullets may go when fired, though the exact location the bullet will go is entirely random.

The cone of fire is dictated by many factors, such as your movement state, your stance and how many shots you have fired recently. Unless the weapon being used is a carbine, jumping will automatically cause the cone of fire to maximise.

The hip accuracy of a weapon dictates the base cone of fire when the weapon is not aiming down sight. This is typically larger than the aim accuracy of the weapon in the same stance. Hip accuracy is affected by the user standing, crouching and moving.

The aim accuracy of a weapon dictates the base cone of fire weapon the weapon is aiming down the sight. This is typically smaller than the hip accuracy of the weapon in the same stance. Aim accuracy is affected by the user standing, crouching and moving.

The bloom per shot dictates the increase of the cone-of-fire with each shot fired. This varies on most weaponry based on whether or not the user is aiming or crouching, though is not affected by movement.

At a certain size, the cone of fire will stop increasing via the bloom. This is the maximum cone of fire, and also varies based on your movement state and stance.

When most weapons fire, the gun will recoil upwards. The angle, in degrees, at which the weapon will kick is shown by the vertical recoil stat.

As well as horizontal and vertical recoil, the recoil angle dictates which direction the weapon will be biased in recoiling towards in the horizontal plane. If the min and max recoil angles can be added to come to zero, there will be no bias and the weapon will be just as likely to go left as right. However, if the angles add to a positive then the gun will far more likely to recoil right, and vice versa for a negative.

Horizontal recoil bias is not actually an in-game stat, rather a largely simplified explanation of the gun's recoil angles and which horizontal direction the recoil will be biased towards.

Measured in degrees per second, the recoil decrease shows how fast your gun will return to the initial firing position after the trigger is released.

The multiplier can be less than 1, reducing recoil on the first shot fired (such as on the SABR-13), will not affect subsequent shots in a burst or during full-auto fire, and can be incurred several times per magazine via burst firing or semi-auto fire. 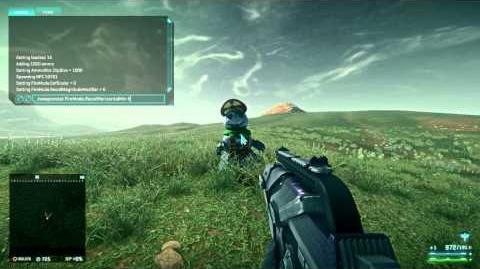